Silent Adventures are coming to Portugal!

For privacy reasons Vimeo needs your permission to be loaded.
I Accept

Yes, Brexit is probably coming. No, nobody knows what it will mean. But in true Silent Adventures style we won’t let it stop us spreading the love. We’re about to launch our first city on the European mainland.

We’re bringing a hella lotta amarella (that’s Portuguese for yella), to one of Portugal’s most stellar cities, Lisbon. And it’s my job to start the Festa.

The 1st thing you notice when you arrive in Lisbon in the middle of July is how exquisitely hot the place is! I must admit, I was a tiny bit apprehensive about dancing for an hour in this sweltering heat. But hey, I’m nothing if not a martyr for my cause so whatever; bring it on.

My hosts for the trip are Ana and Claudia and our first day in Lisbon saw us mapping out the route we’d be taking on our very first tour. Apparently this exercise requires a bellyful of freshly baked Pasteis de Belem- a warm custard tart served with either sugar or cinnamon, a local delicacy seemingly worth queuing down the street for. And a shot of cherry infused spirit known as Ginja which happens to be deliciously moreish. Well, I’m a polite boy so you know, when I’m Rome…

Unpacking the shiny new tech felt like nothing short of Christmas day. Boxes and packaging everywhere and loads and loads of brand new toys! Not only that, but we knew that within a few short hours we were going out to play with every single one of them!

And so, with everything charged and ready to go we made our way to the launch point by the Planetarium, opposite the vast Gothic Jerónimos Monastery, in the centre of the beautiful area of Belem (birthplace of the aforementioned custard tarts).

Soon enough our first adventurers began to arrive. They were a wonderfully diverse bunch, sporting a variety of languages and representing a wide range of ages, not to mention a whole spectrum of clothing, from suits to sarongs and sandals to stilettos. And with the arrival of our film crew- there to document the entire inaugural event (they had a drone!!)– we were finally ready to launch.

Now, I’d been warned by the natives that culturally, the Portuguese were a somewhat conservative people and that they may be confused, perplexed or even a little nonplussed by our antics as we passed them in the street. Well believe me, nothing could have been further from the truth! The looks of bafflement quickly turned to wide eyed wonder as the onlookers, one by one, joined in and danced along with us, smiling and laughing with unbridled joy at this new and exciting whatever it was that was happening in their city!

Lisbon, thank you so much for welcoming us to this beautiful part of the world. Next stop, regular Silent Disco Adventure Tours. I can’t wait to come back and do it all again! 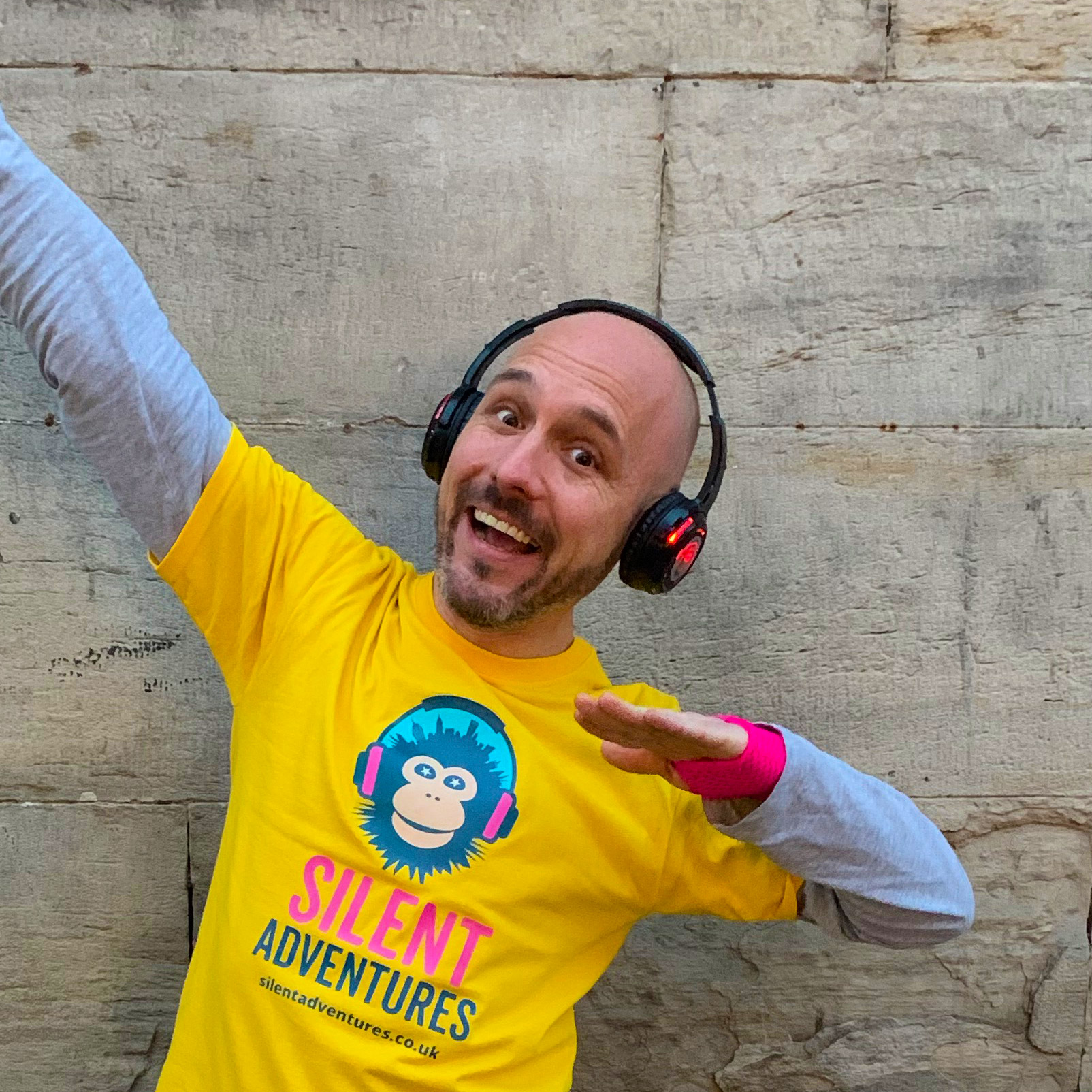 Chairman of Public Shapes and Warbling at Silent Adventures. Mat, when not hosting our all singing, all dancing tours, can be found roaming the cities of the world, training new adventure hosts and introducing our award winning, five star experience to crowds around the globe.